A major American steel manufacturer needed to get a permit to dredge and fill targeted areas in Chesapeake Bay, Maryland.  Because fishery habitat would be lost, they needed a mitigation and restoration plan to outline how they would mitigate for the lost habitat by creating new habitat in a nearby area, thus restoring the lost functionality.

The new habitat needed to meet multiple-use constraints due to the commercial and recreational fisheries in the targeted area.

Results of the Mitigation and Restoration Plan Developed by Aquabio

Return to Mitigation and Restoration Planning from Chesapeake Bay Mitigation 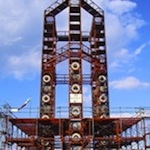